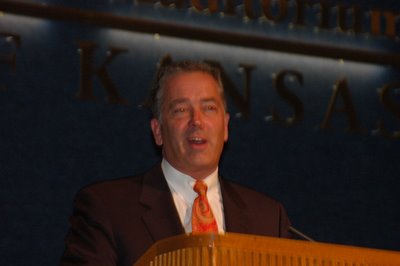 "It was remarkable odyssey" says John Jones, the federal judge who presided over the six-week Kitzmiller v. Dover Area School Board trial, the first legal challenge to a school district that mandated the teaching of intelligent design.

Jones spoke on the first anniversary of opening arguments in the Dover trial to a large, friendly audience in KU's Woodruff Auditorium last night as part of a series on knowledge, faith and reason sponsored by the Hall Center for the Humanities and the Biodiversity Institute.

Despite intense interest in the case, Jones did not say much in his talk about the Dover trial, the details of which, he said, we're rapidly receding from his memory as he hears and rules on new cases.

"There are only so many parking stalls in your head," he joked. "You have to make space for new cars to pull in."

Saying he wanted to talk about broader issues, Jones said the reaction to his ruling indicated to him that people don't understand how the courts work.

"My task was really rather workmanlike," said Jones. "I merely applied the law to the facts as I found them."

After he issued his ruling, Jones noted, he was called a "fascist judge" by television pundit Bill O'Reilly. Evangelist Pat Robertson told the citizens of Dover, who voted out the pro-ID majority on the school board, not to turn to God, "you just rejected him from your city."

Right wing activist Phyllis Schlafly wrote that Jones' ruling "stuck the knife in the backs of those who brought him to the dance.”

Jones quoted a comment published on William Dembski's pro-ID Uncommon Descent blog as summing up this line of thinking on the role of judges and the courts:

This is all about Judge Jones. If it were about the merits of the case we know
we’d win. It’s about politics… Judge John E. Jones… is a good old boy brought up through the conservative ranks… appointed by GW hisself… Unless Judge Jones wants to cut his career off at the knees he isn’t going to rule against the wishes of his political allies.

Following his ruling, Judge Jones and his family were placed under the protection of the Federal Marshall's Service after he received death threats.

Jones noted that all of these comments and the threats of violence reflect a deep misunderstanding of the role of the judiciary.

They "tear at the fabric of justice," he said.

His job, said Jones, was not to please political benefactors, but to apply the rule of law without fear or favor.

Jones said that after the ruling pundits called him an "activist judge, a label now applied to any judge with whose decision we disagree."

Noting an increase in violent attacks and threats against judges, Jones called for a "ratcheting down of inflammatory rhetoric."

If this is not done, Jones fears that the legal system in this country will descend into anarchy and collapse.

"The rule of law," said Jones, "is not a liberal or conservative value. It's not a Republican or Democratic value. It's an American value."

Educating students and the public about the role of the courts is a critical task, says Jones "If I accomplish nothing else in this period of personal notoriety, he said, "I want to restore respect for the rule of law."