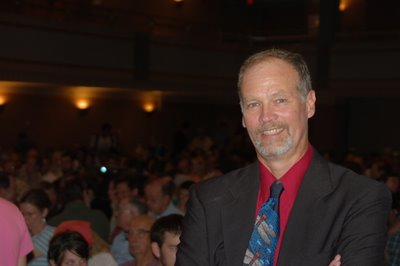 "Creationists," biologist Ken Miller, told a large, receptive audience at the University of Kansas last night, "are shooting at the wrong target."

Showing a slide of the cover art of "The Lie," an anti-evolution tract by Ken Ham, that prominently features a serpent tempting us with a poisoned apple labeled evolution, Miller said creationists mistakenly take aim at Darwin's theory because they believe science to be anti-religious.

Evolution isn't anti-religious, said Miller. Rather, it's the non-scientific philosophical interpretations some humanists, such as Richard Dawkins, draw from the evidence that challenges the role of religion.

Some of those who take a materialist world view assert that science alone can lead us regarding the nature of existence, or that scientific knowledge is the only kind worth having, said Miller. In doing so, these skeptics ignore the limitations of science, just as the creationists ignore the limits of theology.

In fact, many scientists, said Miller, a practicing Catholic, draw the opposite conclusion from the evidence for evolution.

"Faith and reason are both gifts from God," said Miller. "It is faith that gives scientists a reason to pursue science."

Neither the philosophical or theological interpretations of the nature of existence, its purpose, meaning, or lack of it, are scientific, said Miller, because they are not testable.

"God, Darwin, and Design: Creationism's Second Coming," Miller's lecture, was the first in a series of talks sponsored by the Hall Center for the Humanities and the Biodiversity Institute titled, "Knowledge, Faith, & Reason: Difficult Dialogues at the Commons."

Miller is a cell biologist, a professor at Brown University, the author of "Finding Darwin's God: A Scientist's Search for Common Ground between God and Evolution," and the lead witness for the plaintiffs in the Dover intelligent design trial.

The talk Miller gave was a brilliant tour of the various fronts in the evolution wars – Kansas, Ohio, Dover, and Cobb County.

As a key participant in the Dover trial, Miller said the evidence presented by the plaintiffs and the ruling by Judge Jones had two important effects: The collapse of ID as a scientific theory, and the exposure of ID as religion.

Miller related a number of well-received – and very funny – anecdotes about Michael Behe's testimony at Dover. Including this: Behe admitted under cross-examination that the goal of ID was to change the definition of science to one that might also include astrology.

The vice strategy outlined by ID theorist William Dembski, who along with other ID luminaries, passed – at the very last minute – on the opportunity to defend intelligent design under oath also got a good laugh from the large crowd.

While RSR doesn't share Miller's enthusiasm for organized religion, we do agree wholeheartedly with him that science has its limits.

For us, the myth and ritual associated with religious belief has never, for one reason or another, seemed particularly attractive. Where Miller would look to faith to answer existential questions, RSR would look to narrative – Huckleberry Finn is our own particular bible – and music.

We believe the universe is a singularly random and meaningless place – something Miller sees as a rather bleak view – but that doesn't mean that human beings shouldn't imbue their own lives with purpose and meaning.