Ohio: Return of the Mystery Spot 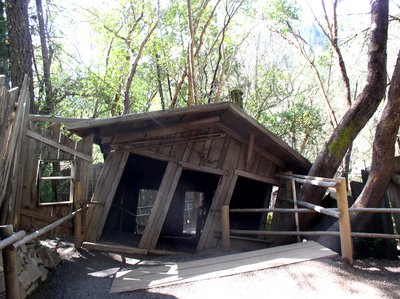 Red State Rabble, though quite old now, hasn't quite forgotten his youthful fascination with the strange roadside attractions encountered on family vacations back in the 50s and 60s.

One particularly vivid memory is of the Mystery Spots. These are the unexplained places -- always conveniently located near a crossroad or freeway off-ramp -- where the laws of nature do not apply. In these Mystery Spots, tennis balls seem to roll uphill, brooms stand on end, and nine-year-olds can walk on the walls.

One such spot, we now learn, is located smack dab in the editorial offices of the Wheeling, W. Va. Intelligencer.

Perhaps acting under the influence of the strange, inexplicable forces at work there, the editors write that "a group of fanatics, calling themselves Help Ohio Public Education, is working to oust a state board member, Deborah Fink."

HOPE is working against Fink, who is seeking re-election as a board member. Clearly, the group intends to punish her for daring to suggest that Ohio students should be encouraged to use the scientific method — that is, critical evaluation — in looking at all sorts of subjects. HOPE wants to demonstrate that when it comes to the theory of evolution, no dissent — not even any questions — will be tolerated. Ohio voters are more open-minded than that. They should re-elect Fink — and any other candidate who stands for teaching students rather than indoctrinating them.

RSR is not quite certain why a West Virgina paper should be concerned about an Ohio school board election, but then we know of a Seattle think tank that staked its somewhat tarnished reputation on the outcome of a certain Kansas election -- so perhaps it's not so strange after all.

The explanation may be that GPS recievers don't work in the Wheeling Mystery Spot. Or perhaps, the editors came under the influence of the strange forces at work in their offices and lost their bearings.

We don't know, but we are delighted to learn that the Mystery Spots of our long-ago youth, which we thought were all gone, remain with us today.

What the Mystery Spots provided for RSR then, they will supply for chilren trapped on long driving vacatons today. Aside from getting away from the boredom of long drives in the family station wagon and the momentary distraction of fighting with sisters and brothers, the roadside stops -- we trust -- will still offer that cheesy sort of charm so characteristic of the species.

Even the nine-year-old RSR could see that these attractions were strictly for the credulous and children with so much pent up energy they would risk the wrath of their exhausted parents for a moment's diversion.

The Mystery Spots then were quite often rough and unpainted on the outside. Most had seen better days and even then could quite charitably be called run down. They resembled the sorts of places RSR imagined 'Lil Abner and Daisy May might call home. We trust they remain so today.

In this sense, it is utterly fitting that the editors of the Wheeling Intelligencer have chosen to place themselves squarely in that intellectual Dogpatch that is intelligent design.