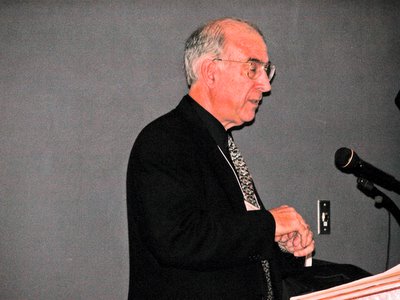 Daniel Ely, an intelligent design activist, testified for ID at the Kansas science hearings last May. He is an author of the ID-inspired Ohio lesson plan that say students should be able to "describe how scientists continue to investigate and critically analyze aspects of evolutionary theory."

At the Kansas hearings, Ely, a professor of Biology at the University of Akron who specializes in cardiovascular physiology, was forced to admit under cross-examiniation that he believes the earth is "somewhere between 5,000 and 4.5 billion years old. It may be much younger than most people think," he said.

It has come to our attention that one of our colleagues, Dr. Dan Ely, testified in favor of the “Minority Report” regarding the teaching of evolution in Kansas’ schools. After reading the transcripts of Dr. Ely’s testimony, we feel compelled to clarify two important misrepresentations that we feel Dr. Ely made to your Board.

Dr. Ely is a physiologist, receiving his formal training in a medical school environment. From Dr. Ely’s own statements as well as our various interactions with him, it is abundantly clear that Dr. Ely has a poor understanding of evolutionary biology.

Indeed, if undergraduate majors in our biology department revealed such profound misconceptions about basic evolutionary biology we would have serious misgivings about conferring their degrees in biology. We have attached a critique of several of his statements at your hearings to make clear our contention.

In addition, while Dr. Ely’s work may be of interest in an evolutionary context, he has not pursued such interpretations. Strictly speaking, Dr. Ely is working on factors on the Y-chromosome that affect hypertension. His research is primarily aimed at delineating physiological mechanisms by which they operate.

Although some of the sequence work that has been done to assay the genetic underpinnings of hypertension could be used in an evolutionary biology study, his work does not specifically test any evolutionary theories, nor is he doing research that can directly address the question posed of him: “Is there indeed, in your view, molecular evidence that tends to not support the idea of common ancestry?”

Because Dr. Ely has no training in evolutionary biology, and because his publications do not reveal any inclination to apply his results to evolutionary theory, we feel that he has misrepresented himself by agreeing to testify as a type of “expert witness” as to the validity of the statement that there is molecular evidence that “tends to not support the idea of common ancestry.”

By his own admission, Dr. Ely does not accept evidence for “common ancestry” and thus has not spent much time exploring the field of evolutionary biology. Moreover, his statements suggest he thinks it is possible that the earth may be only 5,000 years old!

Clearly his views are not consistent with the preponderance of evidence available to both geologists and evolutionary biologists. We want to make it clear that Dr. Ely is not an evolutionary biologist that has come to decide that evolution has so many discrepancies that he no longer supports the idea of common ancestry.

Rather, Dr. Ely is a physiologist whose religious beliefs have caused him to seek out non-existent “discrepancies” in evolution to prove his preconceived notion that common ancestry must be false. Thus, Dr. Ely’s statements are overwhelmingly shaded by his desire to claim evolution is wrong.

“I go to our molecular biologists that are following molecular phylogenies and I say, is there any discrepancy here? This is your area, it's not my area specifically, are there discrepancies? Are there controversies? Absolutely. And so they would go on to explain to me either from plants or from animals the different discrepancies that there are.”

“And as I went to further experts in our department that were geneticists and individuals in molecular phylogeny like this, I said, is there something that we're missing in evolutionary theory? I don't belong to any special groups. I've come to these conclusions on my own. And they said absolutely, absolutely there's
discrepancies. There's discussions all the time.”

Dr. Ely has clearly misrepresented his interactions with his colleagues at the University of Akron by stating that they have conveyed to him “discrepancies” that would cast doubt on the notion of common descent or the more general notion of evolution by natural selection.

He never clarifies what these discrepancies are. In fact the “discrepancies” he is referring to in discussions with faculty in our department are about the minor details of how related one species is to another (which is common in evolutionary biology), not about major disagreements that that shake the foundation of the theory of evolution.

He implies the latter, but no one in this department has made such claims to Dr. Ely. The only “discrepancies” that Dr. Ely has discussed with fellow professors in this department are distinctions in minor details that have no bearing on the questions posed to him during his testimony.

Some faculty have discussed with him smaller scientific arguments about details within their narrow fields, but nothing that even remotely constitutes evidence that something is “missing” in evolutionary theory. Either Dr. Ely has purposefully misrepresented these interactions, or more likely, he is incapable of discerning the lack of importance of these related “discrepancies” because of his lack of understanding of evolutionary biology.

Furthermore, it recklessly implicates evolutionary biologists in the Department of Biology, suggesting that some of us support his ideology. As professional scientists and biologists we find this especially egregious. We strongly assert, for the record, that the evolutionary biologists in the Department of Biology at the University of Akron do not support the unscientific views Dr. Ely has provided as testimony to you and to others.

Overall, we feel that the record should be set straight. Dr. Ely is NOT an evolutionary biologist that has been led to reject the notion of common descent because of his evolutionary research. Rather, he has an agenda to disprove evolution because, in his mind, it conflicts with his religious beliefs. There is no one in the Department of Biology who shares his views on evolution.

We hope that you all will reevaluate his testimony with these facts in mind.