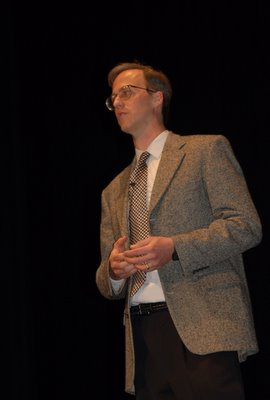 William Dembski, the Carl F. H. Henry Professor of Science and Theology at Southern Baptist Theological Seminary in Louisville, and author of The Design Inference : Eliminating Chance through Small Probabilities, came to Kansas -- the promised land for activists who oppose evolution -- to make his case for intelligent design at an event sponsored by the Campus Crusade for Christ, last night.

Darwin was undoubtedly a great man, with a great idea, Dembski told the audience of roughly 1,200 people at the Lied Center on the University of Kansas in Lawrence, but evolution is not the whole story. In the 150 years since Darwin, he asserted, evolution has proven itself "global disciplinary failure" unable to integrate evidence from the ongoing revolution in molecular biology.

While evolution is able to explain "small scale changes" within species, said Dembski, it has failed to explain the sudden explosion of life forms during the Cambrian period, how a complex structure such as a cell -- which he described as displaying the complex engineering of an automated city -- or biological structures like the bacterial flagellum.

The audience was polite, applauding at both the introduction and conclusion of Dembski's hour-long talk, although the applause that greeted Dembski grew more tepid as the evening wore on.

Catherine Odson, a reporter for The University Daily Kansan described the evening this way:

Audience members awarded both applause and laughter to the questioners who stepped publicly into the controversy over intelligent design in Kansas.

Dembski, who may have been led to expect a warmer reception for his ideas -- he was in Kansas, after all -- seemed to grow testy as questioner after questioner expressed doubt about his assertion that evolution is a failed theory and that patterns in nature are best explained as a result of intelligence.

Dembski, who was both expansive and patient early in the question and answer period -- even allowing follow up questions -- became more combative, frequently interrupting questioners to ask them to get more quickly to the point, as it became clear that many in the audience, perhaps a majority, remained unconvinced.

One young woman, apparently frustrated by the apparent sophistry of Dembski's demand that evolution explain every single step in the evolution of bacterial flagella, while refusing to provide a similar step by step explanation of how intelligent design might have acted to create biological structures, repeatedly asked Dembski to cite physical data or observations that support intelligent design.

Dembski responded by saying that she was asking him to give a different talk. After further prodding, he urged her to read one of his papers.

A number of other questioners pointedly remarked that Dembski's case for intelligent design was more a critique of evolution than a recitation of evidence supporting ID.

Surprisingly, there were almost no questions from the large contingent of Campus Crusade for Christ members in the audience.

It may be that biblical literalists, who make up the largest potential constituency for Dembski's ideas, found that the first swallow of intelligent design theory went down smoothly enough, but the more they heard from Dembski as the evening wore on, the more conscious they became of an unpleasant aftertaste the theory tends to leave in the mouths of those who are motivated primarily by biblical literalism.

Those doubts about the utility of ID theory for those motivated primarily by a belief in young earth creationism might have been reinforced by Dembski's admission that he accepts scientific evidence indicating the earth is 4.5 billion years old and existed long before the advent of human beings.

Dembski's chilly intellectualism, with its focus on information theory, bacterial flagella, and the mathematics of design detection, must seem somewhat remote and unappealing to evangelicals who seek a warmer, more emotional connection to God.