ID at the Crossroads: Dover, Dembski, and the Demise of Uncommon Descent 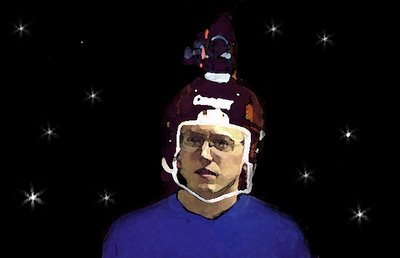 ID theorist William Dembski has announced he will put his blog, Uncommon Descent, into mothballs indefinitely, in order to test design detection gear jointly developed by teams from the Discovery Institute and Southern Baptist Theological Seminary. Dembski is seen, above, testing a prototype device.

William Dembski, one of the best known advocates for intelligent design in the country, announced a couple of days back that he'd decided to put his blog, Uncommon Descent, into mothballs indefinitely. In the same post, Dembski advised his readers to watch for www.overwhelmingevidence.com, which he expects will provide a suitable antidote to the Dover trial."

Saying that Dembski is one of the best known advocates for intelligent design probably understates his significance to that tatty band of true believers, better known as the brotherhood of bible college biologists, by several orders of magnitude.

Dembski's influence in ID circles should not be underestimated. His acolytes refer to him as the "Isaac Newton of information theory," a designation he hasn't bothered to correct. Perhaps because he wants to spare coarser souls -- such as the readers of this blog -- from exposure to a less than convincing display of false modesty.

Red State Rabble has always thought that being hailed as the Issac Newton of information theory by intelligent design advocates was a bit like being called the Captain Cook of exploration by the flat earth society. The accolade, it seems to us, says rather more about the pool from which the talent is drawn than the actual accomplishments of the recipient so honored.

Although Red State Rabble claims no access to Dembski's inner thoughts, we do find it significant that he announced his intention to end the publication of his blog so soon after the Dover decision. That impression is strengthened by his offering a "suitable antidote to the Dover trial."

The sad fact for ID advocates is that there is no suitable antidote. The game is up. Men such as Howard Ahmanson who have bankrolled the Discovery Institute, where Dembski is a senior fellow, will be looking at their investments over the coming months and asking themselves hard questions about the likely payout.

That the news out of Dover is grim beyond all belief for the ID crowd has been convincingly demonstrated by the feverish output on the Evolution News and Views blog since the decision. No, matter how Discovery spins the decision, in the end all they've succeeded in proving is that you can't spin a silk purse out of a sow's ear.

Red State Rabble, for one, will miss Uncommon Descent. That's because, on days when the news was slow to provide inspiration for a post with a good belly laugh, Dembski's blog was our go-to site.

They say that in every cloud there is a silver lining. Perhaps, www.overwhelmingevidence.com will replace Dembski's old blog as a source of inspiration for bloggers like ourselves, students of the human condition, who want add a touch of humor to their posts.

Certainly, the title of the new blog gives us great hope that it will be up to the task.

Thanks to reader SC for prodding us to write about this, something we were intitially slow to do.