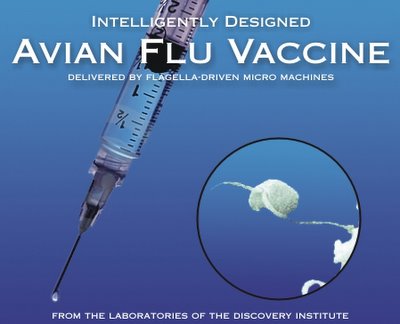 For years, scientists have complained that intelligent design theory is nothing more than idle metaphysical musing with no practical application to the natural world.

Now, intelligent design theorists, working in the laboratories of the Discovery Institute, have proven those Neo-Darwinian naysayers wrong.

Building on research pioneered at the Mary Baker Eddy Institute for Applied Biology in the 1870s, a team of researchers at the Discovery Institute has developed a vaccine to immunize against the Avian Flu.

"The key was in understanding how to harness bacterial flagella to deliver the vaccine directly to the body’s immune system," says biochemist Michael Behe.

"The flagellum is like a teensy, weensy little outboard motor that many bacteria use to swim," adds Behe. And, after apologizing for lapsing into technical jargon, he notes excitedly, "they're machines… literally, machines made of molecules!"

Modern Neo-Darwinism is a dead end, argues Discovery's Stephen Meyer. “Darwinists are wedded to the dogma that the virus could evolve from an organism that infects only birds to one that infects humans. We reject that sterile mode of thinking, and that’s why we got there first.

"They (scientists) have been stymied because they insist on testing their vaccines in rats," adds Meyer. “That's because they think humans and rats share a common ancestor and therefore their genetic makeup is similar. That's so 19th century.

"Our breakthrough came because we understood from the very beginning that humans and rats are both products of sudden – and very, very separate – acts of creation," says Meyer triumphantly.

The Discovery team says it has no plans at present to test the vaccine. The new drug does not need to be tested, says Meyer. "We know it will work!"

Asked how they can insure the vaccine is safe for use in humans, Rob Crowther, director of communications for the researchers bristled. “The news coverage on this project has been sloppy, inaccurate, and in some cases, overtly biased,” said Crowther angrily.

“The legacy media routinely stereotype and caricature scientists who are skeptical of Darwin’s theory in a way that would never be tolerated in stories about minorities, Crowther added pointedly.”

The team says it will now turn its attention to developing a cure for cancer.