Katrina and the Christian Charity of William Dembski 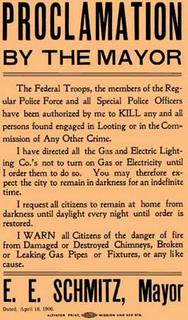 Red State Rabble is old enough to remember a time in this country when fools were still wise enough to remain silent for fear of revealing themselves to the rest of us.

That time, lamentably, is now long past.

Today, fools, cowards, assorted politicians -- please excuse the redundancy -- kleptocrats, big business lobbyists, backwoods pulpit pounders, self-righteous pundits, and the academics gathered into the think tanks they own, have found it their god-given duty to lecture the rest of us on moral values. They presume it is their responsibility to tell the rest of us how to live our lives.

The philosopher, intelligent design activist, and director of the Center for Science and Theology at the Southern Baptist Theological Seminary in Louisville, Kentucky William A. Dembski is on the general staff of these fools.

In 1998, Dembski published an article in First Things, the Journal of Religion, Culture, and Public Life, titled "Science and Design" that lectures us on the breakdown of ethics that results from an understanding of evolutionary theory and the natural sciences:

Design also implies constraints. An object that is designed functions within certain constraints. Transgress those constraints and the object functions poorly or breaks. Moreover, we can discover those constraints empirically by seeing what does and doesn’t work. This simple insight has tremendous implications not just for science but also for ethics. If humans are in fact designed, then we can expect psychosocial constraints to be hardwired into us. Transgress those constraints, and we as well as our society will suffer. There is plenty of empirical evidence to suggest that many of the attitudes and behaviors our society promotes undermine human flourishing. Design promises to reinvigorate that ethical stream running from Aristotle through Aquinas known as natural law.

On Saturday, Sept. 3, while victims of Katrina were still being plucked from rooftops and people were wandering -- without food, water, or the other necessities of life -- past the uncollected bodies of the dead, Dembski, the moralist, published a post titled, "How to deal with looters," that approvingly reproduced a news clipping (above) from the 1906 earthquake in San Francisco where mayor E.E. Schmitz ordered the police to shoot to kill, on his blog, Uncommon Descent.

What has happened to Christian charity? Where is even the glimmer of recognition by this great moral voice that men and women utterly abandoned by their government were making life and death decisions -- shall I let my baby die of dehydration, or shall I go into that abandoned store and take water, or bread, or diapers so that she might live?

No, the meek have inherited what's left of New Orleans and Dembski wants to shoot them.

President Bush -- believing that god acts through him and, himself, a doubter of evolution and a supporter of intelligent design -- ignored the engineers who warned that New Orleans could not survive a direct hit from a Category 4 or 5 hurricane. Did nothing to restore the wetlands of the delta that once offered protection to New Orleans from storm surge. Gutted FEMA. Refused to spend the few million it would take to repair the levees, in order to reward his campaign contributors with billions in a pork filled energy bill.

Just as in the lead up to Iraq, Bush fired the professional who warned him what was coming, and filled the leadership roles at the emergency management agency with political cronies, who, as it happened, had zero experience in disaster planning and response.

Karl Rove has now geared up the White House slander machine to shift the blame from Bush to the governor of Louisianna and the mayor of New Orleans, but this disaster became inevitiable not when Katrina first formed over the Atlantic, but years ago when Bush came into office through an unholy alliance that included tens of millions in campaign contributions from the business community, the votes of right-wing Christian fundamentalists, and the intervention of the Supreme Court.

Red State Rabble does not place the total blame for our current situation on the fools, the cowards, the politicians, their sycophants and hangers on -- men such as Dembski. The complacency of the American people has played an undeniable role, as well. For too long, we have allowed these people to run our country.

The warning of Katrina is clear. If we continue to allow these people to run the country, New Orleans will repeat itself again and again. The Cassandra-like warnings of scientists will be ignored. Those who protest will be fired and disgraced.

We may face one or more of these catastrophes quickly or they may occur years in the future.

No matter when they happen, if sensible people do not begin to reassert themselves, we will be just as unprepared to cope as we were when Katrina struck New Orleans and the levees failed. If we remain complacent now, we may one day all find ourselves living out the nightmarish conditions of New Orleans and the Gulf Coast. We may all be faced with life and death decisions while armchair moralists, such as William Dembski, lecture us on our moral duty.