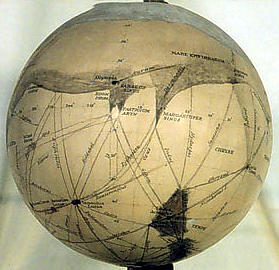 A globe of Mars made by Percival Lowell in 1901 from observations he’d made from his Flagstaff observatory. The straight lines represent what Lowell believed were canals built by intelligent beings to supply water from the Martian poles to the arid regions of the Red Planet. Although other observers, using more advanced telescopes did not observe Lowell’s canals, and spectroscopic analysis of the Martian atmosphere revealed no trace of water (perhaps, because the telescopes used were not sensitive enough) the otherwise brilliant mathematician persisted in this odd belief until the time of his death. Lowell’s obsession with the canals has, in RSR’s opinion, some similarities to the idée fixe that is intelligent design. The globe, above, is at the National Air and Space Museum of the Smithsonian Institution.

Behe can’t tell you much about it, but he knows it when he sees it.

Behe can’t tell you, for example who he believes his designer is, or where in the universe we might find him, her, or it. Likewise, Behe can’t tell you when the act of design happened, or whether is was a single act of creation that set things in motion or a series of individual acts that stretch across the eons from the Big Bang to the first emergence of life billions of years later.

Behe can’t tell you what that act of creation consisted of, or even how it might have come about, but he is certain that he can recognize design when he sees it.

Last February 7, Behe wrote an Op-Ed (read it for free, here, coutesy of our friends at the Discovery Institute) in the New York Times titled “Design for Living” in which he asserted:

"The strong appearance of design [in nature] allows a disarmingly simple argument: if it looks, walks and quacks like a duck, then, absent compelling evidence to the contrary, we have warrant to conclude it's a duck. Design should not be overlooked simply because it's so obvious."

Behe says this claim is uncontroversial:

“… we can often recognize the effects of design in nature. For example, unintelligent physical forces like plate tectonics and erosion seem quite sufficient to account for the origin of the Rocky Mountains. Yet they are not enough to explain Mount Rushmore.”

Red State Rabble does not pretend to have read everything written about Behe and his assertion that we can recognize the effects of design in nature, but we’ve been reading and thinking about it for some months now, and we’d like to open – in a series of posts this week – a new line of attack that we think has been ignored until now. (If any RSR readers are aware of others who have proposed some of the same criticisms that we are making now, please let us know – we’d like to read, and credit, them.)

First, let’s take up the notion that separating “unintelligent physical forces” from the effects of intelligent design is uncontroversial.

For that portion of the U.S. population that reads the Bible literally – some 30 percent of the population describe themselves as born-again or evangelical, and are, therefore, likely to favor a literal reading of the good book – the claim that some things in the universe are the result of design, and some things are not, is not just controversial. It is wrong.

Genesis, for example -- ignoring the unintelligent physical forces of plate tectonics -- tells the mythical story of how God separated the water from the heavens and the earth that is subscribed to by these believers:

“And God said, Let the waters under the heaven be gathered together unto one place, and let the dry land appear: and it was so. And God called the dry land Earth; and the gathering together of the waters called he Seas: and God saw that it was good. (from the King James Version of Genesis 1)”

For those of us who are not in thrall to a literal reading of the Bible, Behe’s Mount Rushmore example simply isn’t up to the task of convincing us that “we can often recognize the effects of design in nature.”

First, notice the slight of hand. Behe promises us a comparison of two examples from nature to prove we can recognize the effects of design: the Rocky Mountains and Mount Rushmore. But, we all know Mount Rushmore is man-made, not natural. We saw the newsreel footage on the History Channel . We know the answers to the who, what, when, where, how questions – we even know the why. Everyone agrees.

Behe's comparison, therefore, is logically false in a disarmingly naive way. It is apples to oranges. It is also extremely revealing about the problms of recognition and identification that lie at the heart of his argument.

In truth, there just is no agreement that we can recognize the effects of design in nature. Where Behe, and a tiny handful of others, see an intelligently designed bacterial flagellum, for example, tens of thousands of scientists around the world see a complex, even beautiful, but utterly natural product of natural selection.

Right at the heart of this problem is the failure to define the basic terms of their theory – an essential task for any philosopher. What is design? What do we mean when we say we “recognize” something, and what are the problems inherent in that process?

The illustration at the head of this post represents the life work of Percival Lowell for whom the Lowell Observatory in Flagstaff is named. Lowell, was a brilliant mathematician -- he predicted the discovery of Pluto -- but, his 23-year observation and mapping of the (nonexistent) canals of Mars, and the inference that they are the product of intelligent beings should be taken as a warning that not all of our beliefs – no matter how strongly held – necessarily cohere to the reality of the universe we think we see before us.

Go elsewhere for an analysis of how irreducibly complex biological structures such as bacterial flagellum might have evolved without the aid of an intelligent designer. For the rest of this week, Red State Rabble will be examining what it means to recognize, identify, separate, and distinguish one thing – such as intelligent design – from another, such as the effects of natural selection.

We will also look at some of the well-known problems associated with human perception that call into question Behe’s bald assertion that, if it “looks, walks and quacks like a duck, then, absent compelling evidence to the contrary, we have warrant to conclude it's a duck.”